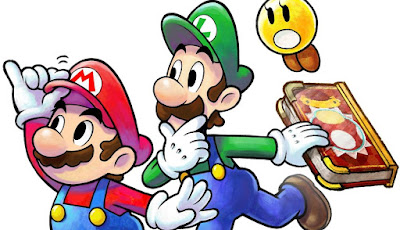 Recently, I had gotten an opportunity by 435 Magazine to visit the Nintendo AirStream trailer, which is a press-only Nintendo event where I tried out many of Nintendo's upcoming holiday and 2016 titles. First off, I would like to thank Kathy Boos of 435 Magazine for presenting this opportunity to me- without it, I wouldn't of gotten an early preview of games like Mario and Luigi: Paper Jam.

Speaking of Mario and Luigi: Paper Jam, that was the game I found to be among my favorites coming out next year for the Nintendo 3DS, combining the game play of the Mario and Luigi series with the unique paper mechanic of the Paper Mario series. In Mario and Luigi: Paper Jam, you play as Mario, Luigi, and Paper Mario, battling enemies such as goombas and koopa paratroopas along your way. In the mode that I played, the trio's goal was to collect paper Toads, specifically 10 of them. I found myself diverging from that goal to battle enemies because Paper Mario's unique copy mechanic was so fun to use in battle. I look foward to seeing more of this game, as it releases on January 22nd, 2016 in the United States.

Next up, I got the opportunity to play the recently released Yo-Kai Watch for Nintendo 3DS. Yo-Kai Watch is a game about a young boy who, while catching bugs for a summer project, comes across a strange capsule machine that, when activated by the boy, released a Yo-Kai Butler named Whisper.
Yo-Kai are mysterious creatures that are the cause of  "life's daily annoyances", as described by the official Yo-Kai Watch Twitter. The young boy (named Nate in the Yo-Kai Watch anime on Disney XD) gains the Yo-Kai Watch, a mysterious device for searching Yo-Kai in an area. Nate uses the Yo-Kai Watch to spot Yo-Kai and stop them from causing mischievous in his town. The concept of Yo-Kai Watch is creative and unique, and so is the game play- consisting of hunting down Yo-Kai and battling them for a chance to befriend them. Each Yo-Kai you catch can be used in battle, and each one has unique traits and "soultimate moves", moves that release a Yo-Kai's true power by preforming actions on the bottom touch screen of the 3DS, not too different from WarioWare's micro games. Players who want to play this game can do so right away, as it's available now- with a free demo on the Nintendo 3DS eShop for free for people who are on the edge.

The Legend of Zelda: Tri Force Heroes, available now for Nintendo 3DS, was a treat to play. The game tasks players with puzzles in different areas to collect rupees and fabric to create clothing items that can be used to make the main character special clothing that grants him special abilities in battle. The game takes place in Hytopia, a place not to far from Hyrule, where fashion is everything. The storyline focuses on Princess Stylia- one day, Princess Stylia receives a mysterious package, sent by the wicked Drablands Queen, that contains magic that restricts her to wearing an ugly unitard at all times. The King sends three destined Tri Force Heroes out on a quest to save Princess Stylia and break the curse of hideous fashion. While the premise doesn't take itself too seriously, the gameplay is like that of The Legend of Zelda: A Link Between Worlds combined with the multiplayer aspect of The Legend of Zelda: Four Swords. The game's puzzles rely on a brand new totem mechanic for the three heroes to preform in conjunction with one another- and the totem mechanic adds new life and challanges to keep the puzzles fresh and interesting every time players enter a new area. I won't go too in-detail about my thoughts on the game, as my full review of the game comes out very soon. The game is available now, and there is a Local-Play demo version available on the Nintendo 3DS eShop for free right now to get a taste for it.

The Wii U's growing indie scene is only getting bigger- and one of my favorite indie titles available right now that I had the opportunity to try out would have to be Runbow. This game is a multiplayer action-puzzle party game with a ton of interesting and chaotic game modes, from single-player "get to the goal" to "capture the flag" mode with 9-players at once. This indie title prides itself on having other independently developed characters from other games join the fun as guest playable characters, as well as having a unique, ever changing, color mechanic. This game gets chaotic but if I said I didn't enjoy myself while playing, I would be lying. This game comes at the cheap price of $14.99 USD on the Wii U Nintendo eShop, and I recommend trying this out.

These games, in particular, are my standout holiday titles that I think any fan of Nintendo should try out. Anyone who has a Wii U or Nintendo 3DS should look these titles up. I'm not kidding when I say these games are some of the finest Nintendo has to offer this year, alongside other titles like Super Smash Bros. for Wii U and Nintendo 3DS, Splatoon, Super Mario Maker, and Mario Kart 8 (all which I highly recommend). Again, a big thank you to Kathy Boos of 435 Magazine for giving me the opportunity to visit the Nintendo AirStream trailer. Happy gaming!