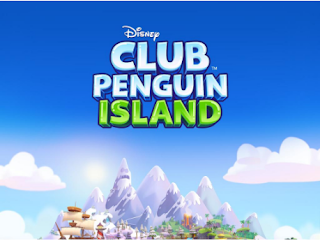 Club Penguin Island is Disney's newest mobile virtual world, spawning off of the massive success that was Club Penguin, an Flash-based virtual world that started in October of 2005 by RocketSnail Games and recently ended on March 29th, 2017.

Club Penguin Island functions and looks distinct from the previous Club Penguin game- for starters, Club Penguin Island features a new world map, new designs for old characters, 3D models and environments, new ways to interact and chat, new emotes (now emoji), and most notably the addition of daily challenges, character story-driven quests, and the much anticipated clothing customizer. There's a lot to do on Club Penguin Island at the start. Although igloos, puffles, and mini-games are absent so far, the island has new features such as fishing, an undersea race course (beat my best time- 23.52 seconds), buying and sharing food and party supplies with other penguins, participating in previously mentioned solo and community daily challenges, and doing quests from Club Penguin's "mascot" characters, Rockhopper and Aunt Arctic.
Speaking of which, Club Penguin Island's grand new feature, the clothing customizer, is where most of the fun of the game comes in. By completing quests in CPIsland, you will receive outfit templates, alongside fabrics and decals for your clothing. Instead of pre-designed clothing, you can use the fabric patterns and decals to customize your penguin's clothes in whatever way you want, and members can purchase their designs to showcase. There's not many limitations, either, with the big restriction being that you can only place one decal per layer on a design. This is what you’re going to spend most of your time doing in Club Penguin Island- it’s addicting, to say the least.

The two mascot characters’ quests are simple but fun challenges. You can access these missions by purchasing a membership on Club Penguin Island. Rockhopper’s quest (Chapter 1) tasks you on finding pirate loot and discovering the mystery of Captain Shellbeard by discovering ancient ruins and digging for treasure. Aunt Arctic’s quest (only 5 missions are available as of now) tasks you on unfreezing the Lighthouse with lava and finding a light source for it’s beacon. None of either Rockhopper or Aunt Arctic’s quest levels take over 20 minutes, and the puzzles are guided and very simplistic for young kids. Sometimes, even for a kids game, it feels like the game holds your hand somewhat too much- there’s an indicator on where you need to go almost every step of the way, and Aunt Arctic and Rockhopper tell you exactly where you need to go. It’s a minor complaint, as for the target audience of Club Penguin Island will likely appreciate the support.

Chatting with other penguins is so much easier in Club Penguin Island than ever before. The strict filter that plagued Club Penguin’s social experience has been done away with. Of course, you can’t go around cursing like a sailor, but it’s much less restrictive. New emoji have been added as well. Much like fabric, decals, and clothing templates, members can unlock more emoji for use as they complete tasks and level up. These emoji range anywhere from a winking-face, a smiling face, a party-popper, a music note, and even the cheeky poop emoji, complete with a smile.

The overly complicated friends list system from the original Club Penguin is gone, and it’s been replaced with a simpler and more reliable friends list. The new friends list allows you to see who’s online, where they are on the island, and even allows you to jump rooms (and worlds) to your friend’s spot. It’s much more convenient, and much less glitchy than before.
The game looks far superior to the original Club Penguin. The 3D environments makes the game stand out when compared to it's 2D counterpart. The Sea Caves, in particular, looks very pretty.
The visuals fall flat when looking at the penguin models and their clothing designs up close. Although a fun addition, the decals and fabric patterns (depending on zoom and rotation, of course), more often than not look like pixelated blotches close up.
Not everything on Club Penguin Island is pitch perfect, sadly. The controls, for one thing, hinder the game experience tremendously. You control your penguin with a multi-directional pad on the left side of the screen, and you perform actions (jump, throw snowballs, inner tube, and special) by pressing the buttons on the right side of the screen. You can adjust it’s size in the settings feature of the app, but at the smallest and medium size, the buttons were too tiny to work with properly, and with the largest size, the buttons were too big to see any of what was happening on screen. The button layout doesn’t work in it’s current state that well- honestly, it almost got me to give up on Club Penguin Island and this review in the beginning. It was that bad. After a few weeks I finally adjusted to my medium-sized layout, but I still found my fingers slipping off the buttons often.

Making money in Club Penguin Island is not as simple as it was before. Instead of having 20+ mini games to choose from, Club Penguin Island doesn’t have mini-games, at launch, that is. Right now the only way to make money in Club Penguin is to grind for collectable items scattered around the island. Each item has a different value and a different refresh time, and can be exchanged at the Exchange booth at the Beacon Boardwalk. To get even 100 coins takes time, and in-between waiting for items to respawn, there is little to do. Sure, fishing is another way for members to earn coins, but even getting all rare fish (each 20 coins), you can get a max of 200 coins every 15 or so hours. To get a sustainable amount of coins to buy clothing with, you’ll find yourself going in circles for these collectables. It quickly gets repetitive. Mini-games have been promised (the return of Sled Racer, perhaps), so this might change as time goes on.

The Club Penguin Island application is HUGE (498 MB on iOS and 190 MB on Android as of version 1.1.3), and with the beginning amount of content available, it only is going to get gradually bigger. I currently am working on several big projects, and because of how much storage Club Penguin Island takes, I had to delete the app several times to make room for my other files, just to redownload it afterwards. Because of it’s size and online-based intense 3D gameplay, Club Penguin Island eats up battery life like it’s a tasty meal- fast and efficiently. It might be a personal problem, but my iPhone 5S heats up after 15 minutes of gameplay, making for a growingly unconfortable gaming experience.