By carter September 03, 2014
Pokemon Omega Ruby and Alpha Sapphire recently got a Japanese trailer that puts a video to the pictures we've been seeing for a while. The gameplay is pretty to look at, and the cutscenes are much better and cleaner than Pokemon X and Y. It's in Japanese but it's a great video to take a look over what we know about the new games. It also looks like when you pre-order Pokemon Omega Ruby or Alpha Sapphire you could get a figure of Kyogre or Groudon in the middle of their primal devolution. 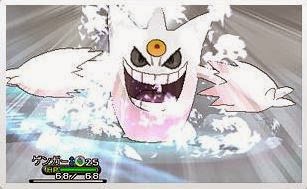 It has been revealed that in Japan Pokemon X and Y will be getting a Shiny Mega Gengar distribution, apart of their "White Gengar" event for Halloween. The event starts September 13th to October 14th.
Gengar is lvl. 25, comes in a dusk ball, and the moves Sludge Wave, Shadow Ball, Confuse Ray, and Astonish, and comes with Gengarite. The event will be at different stores in Japan, and hopefully come to North America in time for Halloween.

What do you think of these updates? Leave a comment below.