The newest trailer is shown above, detailing everything we've learned from this month's CoroCoro. 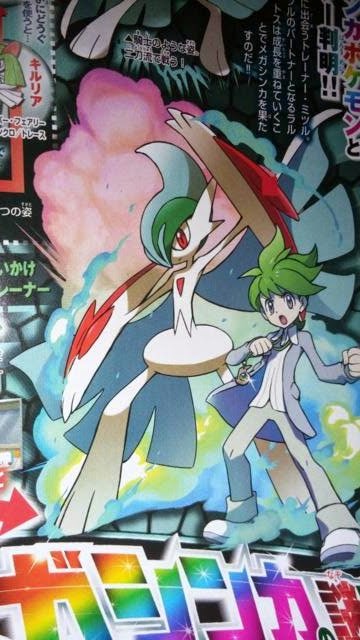 CoroCoro magazine for September 2014 was recently leaked to the public with Pokemon Omega Ruby and Alpha Sapphire news featuring three new megas. The new mega Pokemon are Gallade, who is Wally's signature Pokemon this time around, Camerupt, Team Magma's signature Pokemon, and Sharpedo, Team Aqua's signature Pokemon. This is the first time we've seen of Wally in the new games, but other than that, these mega Pokemon were predictable and everyone expected Camerupt and Sharpedo, but Gallade was a nice surprise. Sharpedo has all it's stats increased (about +20 in every stat) and Camerupt has an increase in all it's stats as well but at the cost of some speed. Mega Sharpedo has the ability Strong Jaw and Mega Camerupt has the ability Sheer Force. We also got our look at the new move and ability Mega Groudon and Mega Kyogre have. Mega Groudon has a new ability called Land of Endings, which activates Strong Sunlight, and Mega Kyorge has the ability called Sea of Beginnings, which activates Strong Rain. While Mega Groudon's new move is Cliff's Blade, Mega Kyorge's new move is not transcribable at the moment. 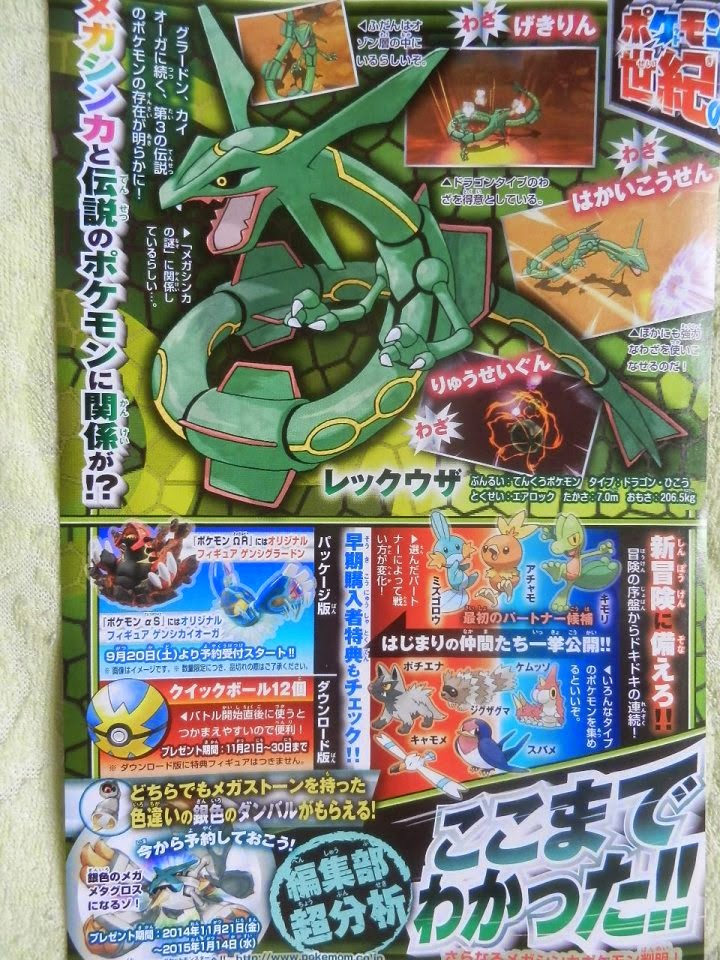 From the magazine Weekly Shonen Sunday in Japan, it has been revealed that in next month's release of CoroCoro (October 15th), a special serial code that will let you access a free trial for Pokemon Omega Ruby and Alpha Sapphire will be given. In the demo, you start off picking a starter Pokemon between Grovyle, Combusken, and Marshtomp and the demo ends with obtaining a Mega Evolution. It's unknown who this Mega Evolution is for, maybe it's a Mega Evolution you can only get from playing the trial, or maybe it's a mega you can get in the demo but cannot transfer it to your full game. UPDATE (9/11/2014): Primal Kyorge's new move is Orgin Wave, Mega Gallade is Physic/Fighing, and has the ability Inter Focus, and Rayquaza is also said to hold a secret Mega Evolution... We also got more information on the demo. It has been confirmed you can transfer items and the mega stone to the main game when it's released, and if you play the demo every day something special might happen...
We can speculate the demo might be coming to North America though, because the Pokemon Company would not let us out on a thing as big as a demo, especially when accomplishing something as a worldwide release.
What do you think? Leave a comment below.