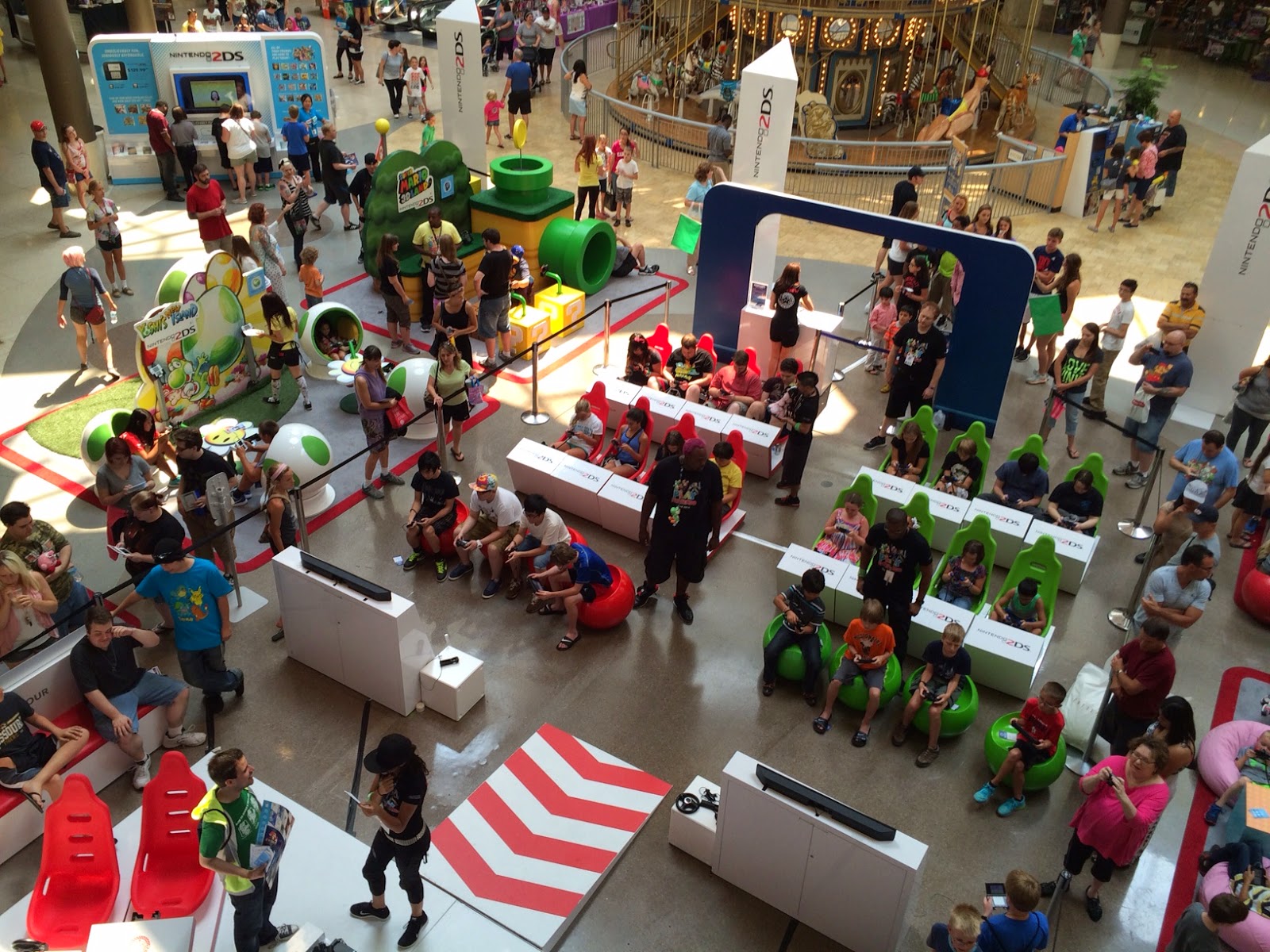 Today the team visited the Play Nintendo Tour 2014, an event hosted to show off the 2DS system and the whole game library available for anyone who wants to  buy one of the systems. For starters, they handed out small packets with a few things to bring home with you, a 10% off any Nintendo item at Target stores, a Tomodachi Life Demo code, and a sheet of paper that you can collect station stickers. These stickers are collected when you answer a trivia question for any of the 6 games being displayed around the event, along with a bonus sticker from the Tomodachi Life booth. 2DS systems are placed at every stand and you can demo any of the select 2DS titles, such as Yoshi's New Island, Super Mario 3D Land, Kirby Triple Deluxe, Donkey Kong Country Returns 3D, Legend of Zelda: A Link Between Worlds, and Pokemon X and Y. If you request a ticket, you can join the Mario Kart 7 trial races that happen during the event. If you have one of the best times out of the group you are in, you are allowed to move up to the semi-finals, and at that point you switch to the Wii U. You race across 4 tracks chosen by either staff or another player. If you pass the semi-finals, you move to the finals with narrators and a crowd watching. The winner of the finals wins a Mario Kart 8 poster and a small doll of Mario.

We had an interview with Cory Alexander, a Nintendo employee working at the St. Louis Play Nintendo Tour event.


Tyler: Do you have any Nintendo sneak peaks to share?
Cory: Maybe; next question.
Me: What's your favorite game here?
Cory: Kirby Triple Deluxe. I've been playing for the last 4 days straight now.
Tyler: Have you played Splatoon yet?
Cory: No, but on this tour I've mainly focused on the games here so I can demonstrate them to the consumer.
Tyler: What do you think of Yoshi's New Island?
Cory: Yoshi's New Island? I enjoy it. It's a side-scroller and is very much like the classic Super Mario Bros, where instead of playing as Mario or Luigi, you play as Yoshi with the help of Baby Mario to save Baby Luigi.
Tyler: Thank you!
Cory: Alright,

If the tour is coming close to you, I recommend checking it out and to see more like this you can leave a comment about what you think.