Why isn't the Twentieth Anniversary Macintosh still made?

By Grant Fitzsimmons October 07, 2013
As you probably are already thinking, what is the Twentieth Anniversary Macintosh? It was an Apple built computer that doubled as a TV. (Yes, it was kind of the first Apple TV)


The TAM featured a 250 MHz PowerPC 603e processor and 12.1" active matrix LCD powered by an ATI 3D Rage II video chipset with 2MB of VRAM capable of displaying up to 16bit color at 800x600 or 640x480 pixels. It had a vertically mounted 4x SCSI CD-ROM and an Apple floppy Superdrive, a 2GB ATA hard drive, a TV/FM tuner, an S-Video card, and a custom-made Bose sound system including two "Jewel" speakers and a subwoofer built into the externally located power supply "base unit". 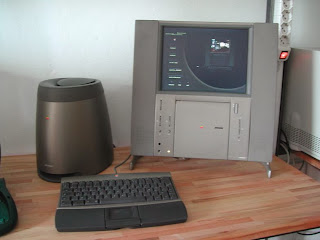 For 1997, this was amazing. So why was it discontinued? First, it was limited edition. It was only released for a limited time, and you are lucky to find one at all, none the less for a small price. Besides that, it was $7,499 USD. This was at its basjc, so it was almost like buying 6 Macbook Pros today. The thing that allowed to sell as well as it did (and I mean well, as in for its price) was its exclusive TV tuner. This gave it a selling point that matched many TV boxes at the time, to a limit. 800x600 did not prove to be a great resolution for a TV, but it worked in a pinch. To really put it into perspective, think about just pressing a button in your Mac, with a trackpad and keyboard duo, and all-in-one system, just to watch some news or a game on TV. That is 1997 or early 1998. Windows was just catching up to having monitors as well as that, none the less exclusive anniversary devices that featured trackpads or keyboards that were easy to use. The price wasn't good. I mean really, really bad. It was the Mac Pro of today, running how a dream computer would run, and seems better in most peoples head that what it was in reality.