Windows 10 Offer now has the option to be declined 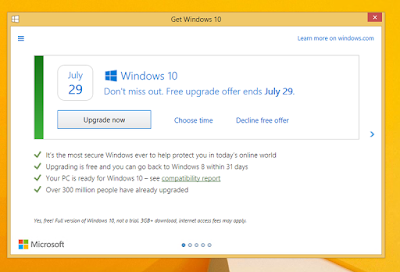 The Windows 10 offer has been updated to include a "Decline free offer" option. Originally, the Windows 10 pop-up only had two options, Upgrade Now and Close. Although it seemed to declined when close was clicked, the upgrade continued to pursue the user and, in many cases, installed against the user's will.

This may be due to a lawsuit in which Microsoft paid $10,000 to a Florida woman because her Windows computer had attempted, and failed, to upgrade to Windows 10. “I had never heard of Windows 10,” Goldstein said, “Nobody ever asked me if I wanted to update.” The court ruled that it although the end user license agreement (EULA) made the user agree to unapproved updates it was not legally binding and caused her damage.

This is a step forward for Microsoft in acknowledging the end-user's rights. The deadline for the Windows 10 free upgrade from Windows 7, 8, and 8.1 is July 29, 2016, so any user interested must do so before that date.

Featured Article: STOP WINDOWS 10 FROM SPYING ON YOU